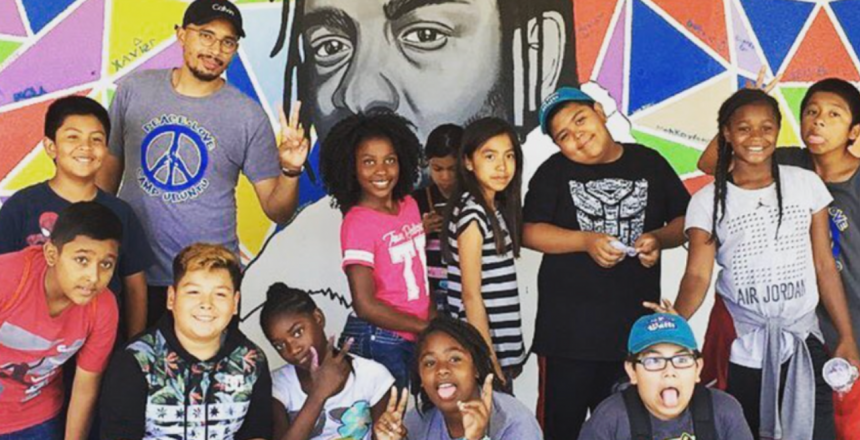 When Joyce Hyser Robinson and her husband, Jeff, launched the Harold Robinson Foundation in 2009, their goal was to open outdoor camps that would give youth in South Los Angeles the same developmental opportunities and fun times they experienced at camp when they were growing up.

The Harold Robinson Foundation has evolved from the simple notion of providing youth with a fun camp experience to improving young lives and creating a positive impact across South L.A. The Robinsons leverage the camp experience as a vehicle for personal empowerment and social change.

Through a diverse set of recreational programs, including arts enrichment and athletics, they give campers powerful lessons in community, character-building, leadership development and healthy living. At the same time campers experience nature or their own neighborhood in a way they never have before.

The foundation’s work is rooted in the South African philosophy of “Ubuntu,” which means, “We rise and fall together as a community.”

As luck would have it, when Joyce Hyser Robinson met the man who would eventually become her husband, he was buying a camp because he wanted to provide a camp for kids who otherwise wouldn’t have that kind of opportunity.

“My husband and I thought that the opportunity we had when we went to camp was life-changing for both of us,” Joyce Robinson said. “I came from a single mom. I was the oldest. I had three brothers.

“I had a lot of responsibilities as a kid. I had to come home from school, do homework, go to dance class then go home and cook dinner. Camp was a way for me to be away from home and be a kid. That’s where I discovered myself. I had a sense of freedom and individuality and space. I got to interact with kids my own age. You can’t bottle that.”

When it first opened, Robinson said the Harold Robinson Foundation, which is designed for fifth-graders, and, depending on the case, for some fourth and sixth graders as well, was only able to give scholarships to a small number of kids to attend summer camp.

After the foundation became a nonprofit, the Robinsons wanted to bring in as many kids as possible from the Watts, Compton and South Los Angeles communities. The kids came from 12 to 16 schools within those three areas.

“The point is to combine schools from different neighborhoods,” Robinson said. “That’s how the transition starts. You are introduced to kids you do not know, who live in a different housing development. The reason we focus on fifth graders and some fourth and some sixth graders is because that transition represents an incredibly difficult time. It’s challenging for everyone, especially kids in Watts in under-resourced communities.”

This year the foundation, whose in-person camp is called Camp Ubuntu Watts, launched ‘CUW 2.0,’ a virtual camp that runs for four weeks, four hours a day, from June 8 to July 6. About 100 kids are participating for free this year.

Although COVID-19 has prevented face-to-face gatherings due to social distancing, the foundation didn’t want to abandon this year’s camp.

According to Robinson, research has proven that children thrive in situations where consistency and set schedules remain in place. It provides safety and comfort in a world of chaos. And while the foundation may not be able to bring the kids to camp, it can bring camp to the kids in the spirit of Ubuntu.

“Although it’s a virtual camp, it is helpful to give them someone to engage with other than their teacher or a parent,” Robinson said.

Since the camp is virtual, the kids who signed up receive a “Camp In The Box,” filled with do-it-yourself projects, exercise equipment and drumsticks. There is also one Zoom session each day where kids can learn dance and yoga.

“The at-home projects are things you can do like an art project, except it’s virtual,” Robinson said. “The virtual camps will be interactive. It’s about the interpersonal experience and being seen, being heard, and feeling cared for.”

The first time they opened the camp, held at Canyon Creek Complex, there were about 250 to 300 participants. Those in attendance participated in arts, crafts, yoga, creative writing and expression, music, athletics, community and character building, leadership development and healthy living.

“The foundation organically evolved into what it is today,” Robinson said. “In 2013, we did a retreat called, Watts United, where we brought five housing developments together for the first time at camp. Kids from all over and some of their parents, teachers, principals, community activists, LAPD, CHP, and an anti-recidivism coalition were involved.

“All came for three days. It was complete insanity. We thought we had made a mistake. There were fights and we were going nuts. But on the last day, it was incredible and everybody was crying because people went back and had a sense of knowing each other.

Cheryl Bonacci is the foundation’s executive director. She also has been a Catholic chaplain with the Los Angeles Archdiocese for 14 years.

Her role is to work with re-entry for kids who are being tried as adults. For 10 years, she has worked with the Anti-recidivism Coalition.

“This work is critical to shifting how they see themselves and their inherent value and goodness,” said Bonacci, who works with 14-18 year-olds and considers the 250 she works with at a time as her adopted children.

Bonacci said it’s between the fifth and seventh grades that kids say they are no longer happy.

“That’s the age they start looking at themselves as a man in the world and start recognizing that the things they are missing are becoming more prevalent,” she said. “It’s a time when kids think things are limited for them.

“You’re in this in-between stage. You have to allow them to be children and learn this new part of themselves they are moving into as a teenager. Kids can’t be kids that long. It’s frustrating for kids across the board. That’s because they don’t have a valuable understanding of themselves.”

Bonacci said at camps, kids are allowed to be who they are.

“We know the underlying impact those activities have,” Bonacci said. “I actually heard from some kids that if they had had a camp to go to, they wouldn’t have ended up where they did.”

The annual budget for the camp is $1 million. To raise that amount, for the last 10 years the foundation has held a fundraiser called, Pedal on the Pier at the Santa Monica Pier. This year’s virtual event is called, Ubuntu in Motion. Ubuntu also translates to, “I am because we are!”

For the event, teams are formed to create peer-to-peer fundraising.

“This year we are launching a virtual fundraiser,” Robinson said. “We want people to create quaran-teams this year. You can bike, walk, or do 100 pushups. Pick your activity.

The intention is to get us out a little bit and get moving. It’s a one of a kind, seven-day event. It’s physical philanthropy that you can do anywhere.”

Harold Robinson was Joyce Robinson’s father-in-law. About 16 years ago, Robinson, now deceased, was instrumental in helping his son obtain the camp’s property.

On its website, Joyce Robinson is quoted as saying, “Working with the Harold Robinson Foundation has been one of the greatest gifts I have ever given to myself. The rewards are infinite and although my work with the foundation exposes me to more poverty, pain, and sadness than I would normally encounter in my daily life, it also exposes me to the positive side of the human spirit and the resilience of people who have so much less than I do. HRF has brought me an abundance of blessings.”