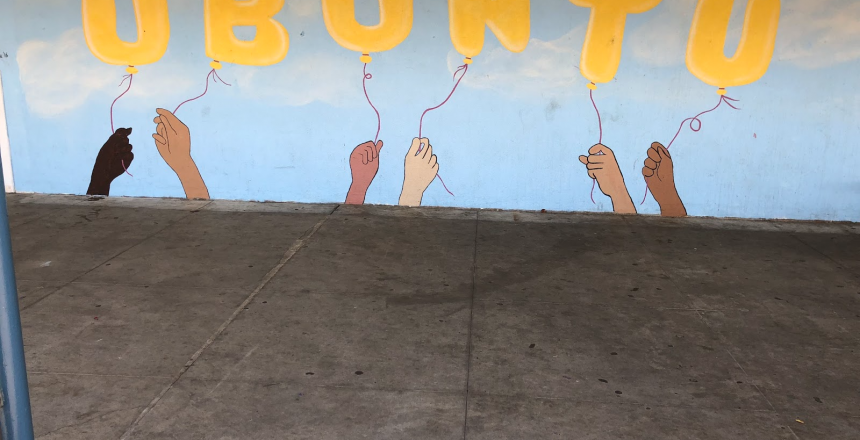 For the first few years of the Harold Robinson Foundation hosting overnight weekend retreats for the under-resourced schools in South Los Angeles, our organization did not have a name for our camp program. We operated out of Canyon Creek Complex, a beautiful 82 acre overnight camp and retreat center in the Angeles National Forest. We referred to our retreats as Canyon Creek Camp, but it was the camp’s physical location, not our work’s essence. About three years into our camp retreats and hosting up to 2,000 campers a year, we began to recognize the impact our camp programs were having in the community of South Los Angeles. It was about time we had a name that reflected our work and mission.

No matter how much we brainstormed, we couldn’t find something that resonated. Roughly a year and a half into the process, I was working on one of my writing projects when I got a case of writer’s block. I started to mindlessly scroll around on Facebook to clear my head when I came upon a post that my friend and now our Executive Director of the Harold Robinson Foundation, Cheryl Bonacci, had posted to her timeline. 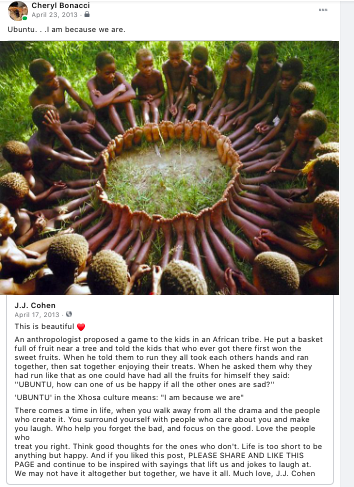 This post burst through my computer screen and hit me right in my solar plexus. It’s what I refer to as a “God-shot.”  Like finding a bright double rainbow after a  thunderstorm. THIS WAS IT. I have never been more certain that I had found what we had been looking for this entire time. One word that says so much, UBUNTU. One word that embodies everything we do, everything we preach—the essence of us. A word like that does not exist in the English language, a relatively young language. Only in the ancient languages, African and Aramaic, will we find one word that can have so much meaning.

Ubuntu comes from the Zulu and Xhosa languages and is one of the founding principles of the new republic of South Africa. It’s about humanism. Something that, sadly, seems to be in short supply these days. The literal translation in Zulu is I AM BECAUSE WE ARE, and it represents the respect, love, kindness, and connectedness we believe should exist between all people.

Thankfully, my husband and foundation co-founder was as convinced as I was that Ubuntu was the perfect name for us. It was a manifestation of our vision. We could not have been more excited to introduce the word and the philosophy behind it to the Harold Robinson Foundation’s Board of Directors.

I wish I could say that the process of adopting the name was an easy one. It was not. It took quite a few conversations to get us there. Our well-meaning board had many and some very fair concerns. They ranged from the word being too difficult to pronounce to an African word and philosophy not being inclusive enough for the Latino population that was also a part of the South Los Angeles community we serve. We felt confident that these were all concerns we would easily overcome.

We consulted with several non-profit and academic world professionals who all agreed that it was a great name, a great philosophy, a philosophy that could live and should live beyond South Africa’s borders. One of the academics we consulted was Dr. Renford Reese. Dr. Reese is a professor in the political science department and founder/director of the Colorful Flags program at California State Polytechnic University, Pomona. He is the author of American Bravado, Prison Race, Leadership in the LAPD: Walking the Tightrope, and American Paradox: Young Black Men. This was his response to me:

“I just looked at your website and your Youtube video. The camp experience seems amazing! The testimonials are inspirational. I love what you are doing and I fundamentally believe that your approach embraces the concept of “ubuntu.” The concept, like your camps, transcends ethnicity. The problem seems to be the ethnic sound and origin of the name. The word/concept is African and cannot be de-Africanized, so it will always sound ethnic. If this is an inherent issue with your team, it will continue to be problematic. This problem is analogous to naming a K-12 school after Martin Luther King Jr. As soon as the school takes on this name, it takes on distinct ethnic connotations that we do not want to discuss be we all subtly acknowledge, e.g., the school is/or will become black, underachieving, dysfunctional, “ghetto.”  If the reason for the pushback, however, is because of the sensitivity of appropriating an African concept, I do not think this should be a concern. By your foundation using the concept, it means the concept has been manifested in the way of its original intent.”

Another argument that I believe may have swayed our board’s decision was NBA head coach Doc Rivers’ adoption of the Ubuntu philosophy during the 2008 Boston Celtics’ championship year. Doc and the entire Celtic team credit the spirit of Ubuntu for their achievements that year. https://sports.yahoo.com/playbook-why-doc-rivers-says-072245595.html

The word ubuntu is even engraved into their championship ring. 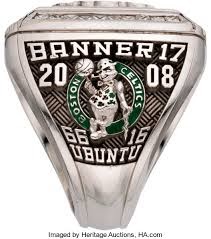 In 2014, we finally named our signature camp programs Camp Ubuntu and Camp Ubuntu Watts. To proclaim that the new name was a resounding success is not hyperbole. The community of South LA  embraced it wholeheartedly. Some schools made it the word of the year, some teachers adopted it in their classrooms, and others used it as their graduation theme. Parents told us that they used it at home too. It did not take us long to recognize that we made the right decision.

During our camp retreats and at summer camp, Ubuntu is spoken and discussed daily. We use it as a rallying cry during team-building activities and at the ropes course when someone achieves their goal or overcomes a fear with their fellow campers’ help and support. We use it to encourage our campers to challenge themselves and step out of their comfort zone.

One of my favorite stories and a great example of the power of how we use and teach ubuntu happened at one of our weekend retreats. We were hosting the 5th graders at 99th St. Elementary school, and they had their school football team and their coach Mr. Sanchez at camp. The football team had to leave very early on Sunday morning to go back into the city to play in a championship game. The team returned to camp later that day victorious. They had won the game, and they credited the spirit of ubuntu and what they had learned about it at camp. The story goes something like this;

With only a few minutes left in the fourth quarter, our team was down by 12 points (2 touchdowns), and it didn’t look good for them. The kids were getting upset and losing their energy when they were in their huddle; before the next play, one of the kids said to his fellow teammates, “remember the word we learned at camp the weekend?’ They all replied, “UBUNTU!” The captain said, “yes, that’s right, we have to come together as a team cause if one succeeds, we all succeed!  Let’s go. We can do this.” They put their hands in and yelled Ubuntu on the count of 3.  They broke out of the huddle and took their positions on the field. Right before the snap, the Coach yells out, “UBUNTU!!” That very next play, their Quarterback throws the ball downfield; the receiver catches the ball, and the player runs it in for a touchdown. Now the score is 12 to 6. They kick the ball to the other team, and the defense holds the other team, and they get the ball back with 15 seconds left in the game. Our team catches the punted ball, the coach yells out UBUNTU, and as their player is running it down the field, he jukes out everyone that comes near him. He runs the whole length of the field to score another touchdown. The game is now tied 12 – 12 at the end of the 4th quarter. They’re going into overtime. Our team wins the toss. As they are about to run their first play Coach Sanchez once again yells, “UBUNTU!!” The Quarterback throws downfield, the ball is caught, and the player runs it in for the touchdown. The team goes crazy. They’ve won the championship!! The kids are celebrating on the field, jumping up and down and yelling UBUNTU. The coach from the opposing team walks over to congratulate Coach Sanchez. He says to him, “Great job, Coach. I gotta ask you a question. What the heck is the ubuntu play?”

Through ubuntu, young people learn that we must rely on and support each other to ensure success as an individual, as a family, as a team, and as a community. Through these philosophies, our students recognize that they play an essential and valuable role in their community.

I strongly believe that our country cannot thrive if our disinvested communities, families, and children fail. The Harold Robinson Foundation is spreading Ubuntu all over Los Angeles, and it’s beautiful to watch all of the very diverse communities we work with embrace this humanist philosophy.

If we unite, we can make our community, our country, and our planet a better place.